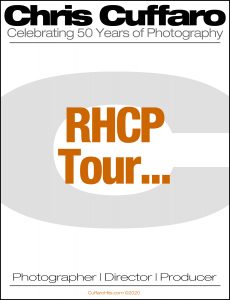 Going on the infamous Red Hot Chili Peppers, Smashing Pumpkins & Pearl Jam tour for a week. Just when things were heating up for Pearl Jam and the “Alternative” movement.  In Los Angeles & San Francisco Nirvana took the Smashing Pumpkins place.  I got do an interview with RHCP, PJ and Nirvana for ABC’s In Concert.  Fucking awesome!!!